Isis – How I became a Holistic Veterinarian 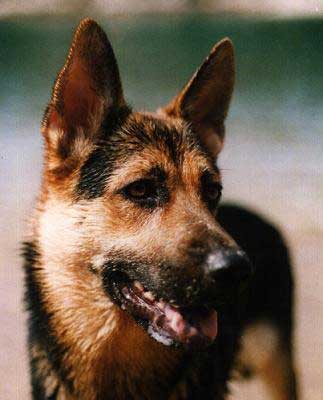 Isis came to me in Hong Kong, many long years ago, that passed so quickly. I was working as a veterinarian in a small clinic there, and it was her last stop before the pound, where she had little chance of ever leaving; she never made it to the pound. She looked deep into my soul and she stayed. She came to be my teacher and lived her lesson well. It was her birthday in May which seemed to suit her wise and wiley personality. The long and magical years Isis was by my side went in the blink of an eye, she moved through three continents, many other animals came and went, and there were other countless changes, she was the only constant, loyal in her love. All our animal companions are special, but some are more special than others, leaving indelible paw prints on our hearts. Isis was one of these dogs.

Isis was a black and tan German Shepherd mix, her parentage was a little questionable, so we didn’t talk about that, but indigenous feral dogs lurked quietly in her genes. She was compact and muscular, and had a wise and beautiful face, with deep brown eyes that had a depth and intelligence which could not be missed. She was a unique Hong Kong Shepherd, that little known breed. I know she came to be a teacher to me and she served her lessons with dignity and love. If she had been able to talk joy, fun, wisdom and healing with compassion would be her sermons. But she taught me in her own quiet manner, and never preached or bored. If only human teachers could teach us like animals, how much we would learn.

As a puppy Isis was vibrant and full of life, she loved to chase leaves, and always caught them unawares. She reveled in her walks by the aqua ocean, by the crystal clear waters of the South China sea, she was a dog of the tropics, and never learned to like rain. She would surf the waves, and then roll in the sun bleached sand, looking at me from the corner of her eye, to make sure I was watching her antics. What a show she put on, and how much joy and fun she helped me to have, sometimes we would sit on a rock by the ocean and watch the red disc of the sun drop silently into the dark water. What thoughts she had she never shared, but I know she knew all I was thinking.

We shared some happy months until the day I saw the tick. It was also the day I hiked up into the mountains and walked through the jungle, to look down and see a dangerous green bamboo pit viper under my foot, as I was about to put my foot down. I froze and stopped, it went on, but left a silent warning that things would not always be such fun and ease. I shivered and went on with my walk, and that evening removed one tick from Isis, and thought nothing more about it.

The next day I looked at Isis, she looked worried and was trying to tell me something. I took her temperature and it was a hundred and four, already two degrees above normal. I knew it was a tick disease, and immediately gave her the appropriate treatment, thinking she would be fine by that evening, and glad I caught it so early. Two hours later I came into check on her and her temperature was a hundred and six. She was weak, lethargic and her gums were pale. She lay there on her side weakly wagging her tail, that only yesterday had never been still for more than a millisecond.

This was serious, and I started her on more treatment, and injections, they always worked before and tick diseases were not uncommon in the sultry Hong Kong climate. Bloodwork revealed not one but two serious tick diseases, often fatal. I was doing all I could, all I had been taught in the long days of veterinary college. She rallied a little, but would vomit the medicine, and would eat nothing. She started on intravenous fluids and came around a little, would drink a little chicken broth if coaxed. But as the weeks went on she went into a chronic state and her bone marrow shut down. I knew this was the end and did not know other options, and sat prepared to watch her die. She lost pounds and was thin and weak, but her will to live was strong and I decided to respect that.

Friends suggested I try alternatives, and clutching at straws, I thought, I did. How could homeopathy, dilute substances, possibly do anything where the drugs had failed. Oh what lessons we learn. I consulted with a professional colleague, and started her on natural foods, and supplements for her weak and compromised immune system. Well it made sense, and what gourmet foods I cooked and served with such enthusiasm, well I thought they looked good, but Isis was much more discerning. But then she started to eat, I had to feed her by hand, she enjoyed my being her hand maiden. I saw subtle changes, a little burst of life, and the sparkle started to return in her eyes. Maybe, just maybe, there was something to this treatment.

Amazingly bloodwork showed improvement, when she got a remedy her bone marrow would make more cells, and her blood began to grow red and strong again. Months passed and Isis emerged from her illness, she started on her path to healing and I started on my path to learn about healing. Trained in rigorous scientific dogma, it was alien to me, but I studied holistic healing, traveled to Tibet, watched the monks pray and absorbed much. Isis studied more leaves and sand, and absorbed much, in her canine studies of life. 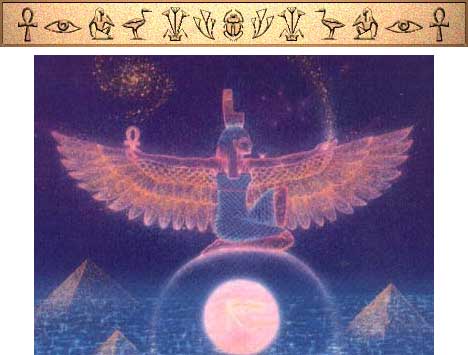 I moved back to England, and then to America. Isis came too, taking the long flights in her stride, even graciously allowing a white Bengal tiger to share her flight to Florida. We studied hard, and I became a full time holistic vet, able to help other animals, who perhaps could not be helped my more conventional means, knowing I was following the path I was meant to, but never would have found without Isis. Sometimes she would visit animals that were sick and hospitalized, and sit by them, seeming to heal them too in her gentle way. Never sociable with healthy animals, being more attuned to people, she knew when animals are sick and offered her compassion. She was named Nurse Isis at one clinic I worked.

So what lessons and paths she has taken me on, and the thirteen long years were only too short. She remained in good health, until her death in 2003, and every day was a gift I never expected, but she surprised me one more time with a big and very crazy gift, never being spayed due to her health problems when she was younger. Her legacy lived on in her daughter, and her lessons, who lived with me for nine loving years, in a much fuller animal household, where Isis always ruled supreme, in her wise and knowing way, and where her presence still lives on in me.

How could I have known when she chose her name, that Isis was to teach of healing in such a miraculous way just like her namesake the Goddess Isis. And beyond healing, how much she taught about love.

Her Companion Ozzy left just before she did, and I know they waited until I was in a different phase of my life, then both elegantly left, though their love and presence will always be there, and they live on in my heart as do all my beloved animal friends.

Dr. Anna Maria Wolf is a holistic veterinarian, based in Washington State, and practices acupuncture and homeopathy, herbology and other holistic modalities. She lives on the Olympic Peninsula with her teenager and a lot of rescue animals including one dog, six cats, four goats,  guinea-pigs, two cockatoos, a donkey, a horse, a flock of chickens, geese and a dozen rescue ducks and several reptiles.